Markets move up around the world

Earnings for the second quarter of 2016 came in better than expected. With 63 percent of S&P 500 companies reporting, the blended earnings decline of 3.8 percent was better than the 5.5-percent decline anticipated on June 30. Additionally, 71 percent of reporting companies announced earnings per share above estimates—higher than the five-year 67-percent average. When companies beat expectations, this often helps drive the markets higher, and we saw that in July.

Technical factors also improved during the month. All three major indices remained above their 200-day moving averages, often a sign of continued strength.

Developed international markets were also up for the month, albeit following a bumpier ride. The MSCI EAFE Index of developed markets outside the U.S. gained 5.07 percent in July. Concerns about the failed coup in Turkey and fallout from the Brexit vote had initially driven the index down, but by month-end, the index had climbed above its 200-day moving average, a positive technical development.

Emerging markets also did well, gaining 5.03 percent in July. Despite the turmoil in Europe and Turkey, technical factors for the MSCI Emerging Markets Index remained positive, as it stayed above its 200-day moving average for the entire month.

Broad U.S. fixed income markets also had a positive month. The Barclays Capital Aggregate Bond Index gained 0.63 percent for the period. The high-yield portion of the market, represented by the Barclays Capital U.S. Corporate High Yield Index, performed even better, posting returns of 2.70 percent. Even though rates were volatile in July, they closed at levels close to where they had started, largely due to increased inflows from foreign investors seeking safety.

A series of positive economic data surprises helped increase confidence during July. One of the major domestic economic concerns had been the industrials sector, but the month began with the ISM Manufacturing survey surprising to the upside. The 53.2 reading was the highest since February 2015 and suggests that the sector is stabilizing. This announcement was followed by the ISM Non-Manufacturing Index, which posted a 56.5 reading, pointing to continued strong growth in the service sector. As both measures beat expectations, this could point toward accelerated growth in the U.S. going into the second half of the year.

Perhaps more important, the June jobs data blew away expectations, with 287,000 nonfarm jobs created, well above the estimated 180,000. This number represented the largest increase since October 2015 and helped calm worries following the dismal jobs report for May. As illustrated in Figure 1, the very strong June report came after two weak months, which had given rise to fears that hiring was on the decline. 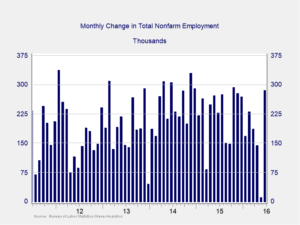 Housing, among the bright spots in the U.S. economy, continued to grow at a healthy pace. The July survey of home builders came in at its 2016 average of 59, indicating steady growth. Additionally, existing home sales rose 1.1 percent in June, to a 5.57-million annual rate, beating estimates of 5.50 million and reaching the highest level since 2007.

A final bright spot was a surprising increase in retail sales, which were up 0.6 percent in June compared with expectations for a 0.1-percent gain. This follows a positive 0.5-percent gain in May and indicates that consumers are willing and able to spend. It could also bode well for future growth, as consumer spending constitutes roughly 70 percent of the domestic economy.

Despite the positive employment and consumer news, and the improving surveys, business investment continued to disappoint, particularly in the durable goods orders report for June. Driven by this weakness, the advance reading of second-quarter gross domestic product (GDP) growth came in well below estimates—at an annualized quarter-over-quarter rate of 1.2 percent. Moreover, the announcement included an additional downward revision to 0.8-percent growth for the first quarter of 2016.

Even though the low GDP growth is disappointing, it largely reflects a worse-than-realized downturn for the first half of the year and is only an initial estimate. More positive trends across the economy now could well lead to positive revisions to the estimate—as we have seen before—in addition to faster growth in the second half of 2016.

Risks elsewhere in the world continued to demand attention. The most widely discussed international event in July was the failed coup d’état in Turkey. Although the motives remain unclear, the attempt by a faction of the Turkish Armed Forces to seize power from President Recep Tayyip Erdogan highlighted the very real political risks abroad. International markets in general withstood the short-term volatility of the coup attempt, with the MSCI EAFE and MSCI Emerging Markets indices trading higher at month-end than in the days before the uprising. The worst economic impact of the event seemed to be on Turkish markets and currency.

In Europe, political risks receded, as Brexit moved from a crisis to a process. Nevertheless, economic concerns mounted, particularly over the health of the Italian banking sector. A weak Italian economy has led to a threatened banking system, and new European Union (EU) restrictions on government bailouts are raising the economic risks for Italy and Europe as a whole. Worse still, the new restrictions are increasing the appeal of the Eurosceptic Five Star Movement, returning political risk to the table.

Asia continues to experience its own mix of economic and political risks. With uncertainty about Japan’s economy persisting, the decision by the Bank of Japan to maintain rather than increase its stimulus programs disappointed investors and strengthened the yen, which could lead to a significant profit decline for Japanese companies. This profit decline could also increase the pressure on the Japanese stock market, already down roughly 12 percent year-to-date.

China also continues to raise concerns, including its currency devaluation and defiant response to a U.N. tribunal’s decision regarding its territorial claims in the South China Sea. Economically, the currency devaluation is not an immediate problem, but with the yuan at its lowest level against the U.S. dollar since 2011, it is worth monitoring. Note that this trend is similar to what spooked the markets earlier this year. Further devaluation, especially if it is sudden, could have a negative effect on global markets.

Politically, the U.N. tribunal’s decision against China’s claims may force the nation to up its ante militarily. Much like the currency valuation, this possibility may not be an immediate concern to global markets, but any surprise negative development could adversely impact global stability.

Improving trends favorable for second half of 2016

Slow and steady U.S. growth combined with international risk has been the theme for quite some time. But improving trends in the domestic economy and signs of lower risk abroad suggest that the second half of the year might be better than the first. Positive economic signs include strong U.S. job and consumer spending growth, as well as improving business sentiment. Positive political signs include the apparently successful negotiations regarding the Brexit vote, a new sense of reality in the EU, and the decision by Asian countries to negotiate with China rather than confront it over the U.N. ruling. Even the Federal Reserve, in its July meeting statement, was notably more positive about the U.S. economy, and it didn’t mention the international risks.

As we saw in July, and indeed see every month, risks remain here and abroad. The U.S. economy is the most stable and resilient of the world, and improving trends suggest that this situation will continue. Still, short-term volatility is likely, especially as we move toward the November elections. A well-diversified portfolio with a long-term perspective is, as always, the best means of achieving financial goals through good times and bad.

Rich Tegge is a financial advisor located at Wealth Strategy Group 300 S. Front Street Ste C, Marquette MI  49855. He offers securities and advisory services as an Investment Adviser Representative of Commonwealth Financial Network®, Member FINRA/SIPC, a Registered Investment Adviser. He can be reached at 906-228-3696 or at rtegge@wsginvest.com.
Authored by the Investment Research team at Commonwealth Financial Network. © 2016 Commonwealth Financial Network ®
Disclosures: All information according to Bloomberg, unless otherwise stated. Certain sections of this commentary contain forward-looking statements that are based on our reasonable expectations, estimates, projections, and assumptions. Forward-looking statements are not guarantees of future performance and involve certain risks and uncertainties, which are difficult to predict. All indices are unmanaged and are not available for direct investment by the public. Past performance is not indicative of future results. The S&P 500 is based on the average performance of the 500 industrial stocks monitored by Standard & Poor’s. The Nasdaq Composite Index measures the performance of all issues listed in the Nasdaq Stock Market, except for rights, warrants, units, and convertible debentures. The Dow Jones Industrial Average is computed by summing the prices of the stocks of 30 large companies and then dividing that total by an adjusted value, one which has been adjusted over the years to account for the effects of stock splits on the prices of the 30 companies. Dividends are reinvested to reflect the actual performance of the underlying securities. The MSCI EAFE Index is a float-adjusted market capitalization index designed to measure developed market equity performance, excluding the U.S. and Canada. The MSCI Emerging Markets Index is a market capitalization-weighted index composed of companies representative of the market structure of 26 emerging market countries in Europe, Latin America, and the Pacific Basin. The Russell 2000® Index measures the performance of the 2,000 smallest companies in the Russell 3000® Index. The Barclays Capital Aggregate Bond Index is an unmanaged market value-weighted performance benchmark for investment-grade fixed-rate debt issues, including government, corporate, asset-backed, and mortgage-backed securities with maturities of at least one year. The U.S. Treasury Index is based on the auctions of U.S. Treasury bills, or on the U.S. Treasury’s daily yield curve. The Barclays Capital Mortgage-Backed Securities (MBS) Index is an unmanaged market value-weighted index of 15- and 30-year fixed-rate securities backed by mortgage pools of the Government National Mortgage Association (GNMA), Federal National Mortgage Association (Fannie Mae), and the Federal Home Loan Mortgage Corporation (FHLMC), and balloon mortgages with fixed-rate coupons. The Barclays Capital Municipal Bond Index includes investment-grade, tax-exempt, and fixed-rate bonds with long-term maturities (greater than 2 years) selected from issues larger than $50 million.
Website by FIRE PIXEL